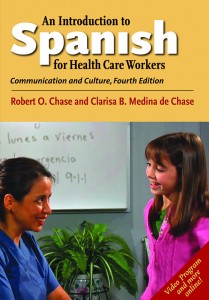 An Introduction to Spanish for Health Care Workers

Getting to Carnegie Hall
A Verb’s Eye View
Getting to Carnegie Hall
This is an old one. A man in New York City asked a cabbie how to get to Carnegie Hall, and the cabbie said, “Practice!” Here’s an update. Speaking is not only the goal of language learning. It is the instructional method itself. Conversation is both the means and the ends. Like riding a bicycle or playing tennis, it is a learn-by-doing proposition. In a technical pun, grammar is a programming language; conversation is a user interface.Speak Spanish everywhere you can. As soon as you learn a new word, phrase, or question, practice using it with every Spanish-speaker you meet. Visit ethnic shops and restaurants; speak to your patients and coworkers; reinforce and consolidate your learning by using it in a natural context to make meaningful conversation.Avoid the temptation to think in your first language and translate to Spanish. Wherever possible, practice new vocabulary by drawing and labeling pictures (flash cards) and by writing sentence-length captions for your drawings. Translating is an advanced skill that requires many years of study. Speaking is something that you begin to do on page one of your textbook.In summary, we don’t learn language, we acquire it. This is why immersion is a good method. Speaking a second language requires practice. Learning happens when the learner takes responsibility for autonomous production of speech to accomplish real-life, meaningful tasks. Your textbook provides many opportunities to use Spanish in simulated medical situations with your teacher and classmates. You may feel awkward, nervous, or vulnerable at first. However, speaking Spanish in the classroom will help you achieve your goal of speaking with patients in unrehearsed settings.
A Verb’s Eye View

Many learners struggle at first with the morphology of verbs. In the book, we use a chart that looks like this:

Although we usually provide several examples of sentences, here is an alternative explanation that may help you.

The third person is someone that you are speaking about, but not the person you are addressing. Speaking in third person is to ask or tell about a third party. It can be singular and plural.